NOTE: Applies to examples only

Just import all files into your project.

In order to make use of Rewarder’s functionalities, you have to establish a Reward Manager:

NOTE: It is recommended to create the Reward Manager in your persistent scene.

After the initiation in your scene, you can simply use its reference and call
its methods anywhere in your code, e.g.: 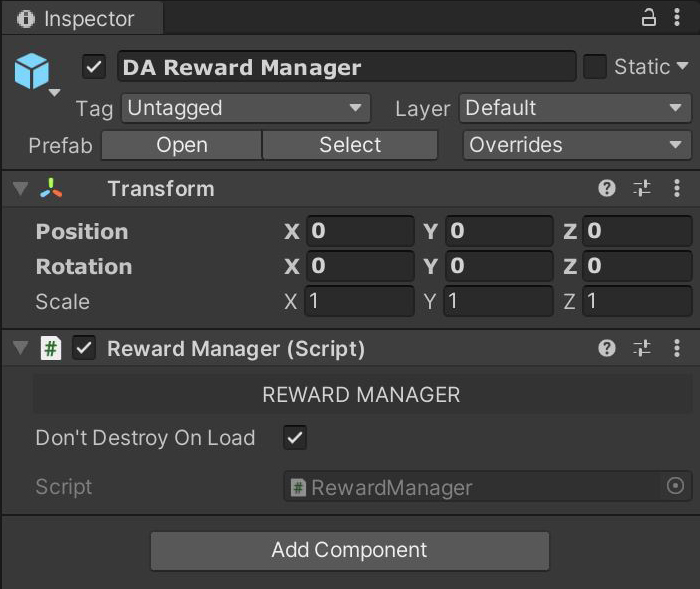 There are only few methods to operate with:

NOTE: Before you continue, you should read the documentation about Scriptable Items & Groups

DropTable is a derived class from class ScriptableItem just like ScriptableGroup, so it inherits metadata attributes (UID, Label & Description).

Besides that, each Drop Table has its own Reorderable List of classes DropTableRow, which represents the rows of the table.

Each row has its own UID, Item, Weight and Quantity.

UIDs can be easily copied to clipboard by clicking on

Item represents the Reward. It can be any derived class of ScriptableItem, which means that it can be also a ScriptableGroup or even another DropTable.

Rewards can be also quantified. There are 3 options:

Picking the rewards is really straightforward, you just need to call the PickRewards method of the Reward Manager and provide the source Drop Table, from which you want to pick rewards, e.g.:

There is also a possibility to pick random number of rewards:

In this case will Reward Manager pick guaranteed rewards (rows with weight of -1) and additional 2, 3, 4 or 5 other rewards.

NOTE: The random number of rewards or even the random quantity are computed by global System.Random instance, which you can freely set before picking by SetGlobalRandom method of the Reward Manager.

If you want to pick only guaranteed rewards, you can do that also:

If you need more control over rewards picking process, you are free to provide PickOptions as the third parameter of this method.

The output of method PickRewards is an instance of class PickResult. PickResult contains an updated instance of PickOptions and a list of instances of class Reward.

Reward is a wrapper class, which contains the picked Scriptable Item, its quantity and the paths that were taken during the picking process. The path consists of UIDs of visited rows.

You can get Reward’s Path or UID easily by calling its method GetPath or GetUid. In the case of Reward instances, the UID is a Path joined by dash.

By providing the PickOptions as the third parameter of method PickRewards, you are able to override default picking behavior:

The value of attribute Seed is changing at every execution of method PickRewards by default. By providing the Seed value, you are able to control the randomness of picking and even repeat randomness.

Snapshot is a flat representation of Drop Table in time. It is a simple list of classes DropTableSnapshot. By providing it in PickOptions you are able to override Drop Table’s default weights or quantities before picking. You are free to serialize it e.g., into JSON and store, so you will be able to recover the last state of Drop Table next time you will need it.

NOTE: Snapshot is frequently used in combination with Replacements.

There could be cases where you will need to pick rewards without replacement, which means that when is a Reward picked, its weight is decreased, so next time there is lower possibility to be picked. When it reaches the weight of 0, then it will be not picked anymore.

There are multiple possibilities to define affected Rewards:

You are free to implement the Replace function of PickReplacement instance. If there is no function defined then the default routine will run, which is decreasing the weight by 1.

NOTE: Define as much PickReplacement instances as you want, just keep in mind, that they are executed in defined order. Same applies for Conditions and Modifiers too.

Conditions excludes Rewards from PickResult, which matches the criteria. Like at Replacements there are multiple possibilities to define affected Rewards:

NOTE: By providing the UID of ScriptableItem, you are excluding each row with that item i.e., each Reward.

By setting the value of attribute Startup, you are able to decide whether you want to exclude matched Rewards before picking or after picking straight before building PickResult instance.

Implementing of the Validate function of PickCondition instance is required.

Modifiers are used to modify the Weight or Quantity of Rewards, which matches the criteria. The difference between Modifiers and Replacements is that, that the PickModifier’s modifications are not updating the Snapshot, while at Replacements are modified weights stored in Snapshot. Also, Modifiers are able to modify weights even before picking.

Like at above 2 there are multiple possibilities to define affected Rewards:

By setting the value of attribute Type you are deciding whether you are going to modify the weight or the quantity of Rewards.

Implementing of the Modify function of PickModifier instance is required.

NOTE: The parameter of function Modify is an array of integers. This is because at Random Quantity you have to modify a range.

The value of attribute Group is telling whether you want group Rewards in PickResult based on ScriptableItem UID or not. Grouped Rewards may have multiple Paths and so multiple UIDs. By this, you will always have a chance to find out from where those Rewards came from. 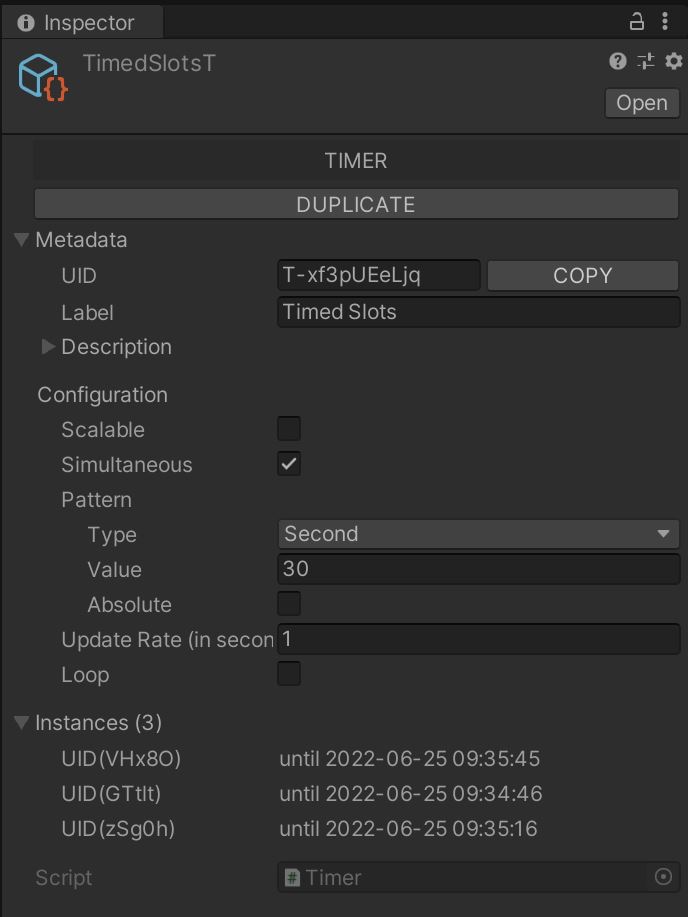 Besides that, each Timer has its own configuration and a list of active instances.

NOTE: There is a possibility to do a time leap by setting the time manually by SetGlobalTime or SetGameTime methods of the Reward Manager, which could come very handy during debugging.

You are free to register any number of Timers, through the RegisterTimer method of the Reward Manager, you just need to provide a source Timer and optionally an implementation of onComplete and onUpdate routines:

By registering a Timer, you are creating an instance of that Timer, a TimerInstance, which makes use of the Timer’s configuration (TimerConfiguration) and the provided options (TimerOptions).

By setting the value of attribute Scalable you are deciding whether the Timer should use Global or Game Time. True means, that it will use Game Time.

The Pattern is the most important attribute, which is used to calculate the end of the Timer. By pattern you are basically defining the duration of the Timer, which can be in milliseconds, seconds, minutes, hours, days, months or years. There is also a possibility to define an Absolute Pattern by checking the Absolute checkbox. Let’s say, we have just registered a Timer with an Absolute 1 Day Pattern. The Timer will end at the start of the next day. In contrast with a Relative 1 Day Pattern, which would end after 24 hours.

The Update Rate controls, in what intervals should the Reward Manager call the onUpdate routine.

Lastly, the value of attribute Loop is telling whether to restart the Timer after the onComplete routine is called or no.

As you can see above, by the instance of TimerOptions you are able to implement the onComplete and onUpdate routines, but there is more:

There is a possibility to define the Start and End Time and also override the Pattern, Update Rate or Loop attribute from TimerConfiguration.

In case that the attribute StartTime is not provided, then System.DateTime.Now is used.

The EndTime takes precedence before the Pattern. If it is provided, then the Pattern is ignored. The Pattern will be used again the next EndTime calculation e.g., at Timer’s restart.

What are your Feelings

Still stuck? How can we help?

How can we help?

Scriptable Items & GroupsCountries Collection
Table of Contents
Shopping Basket
We use cookies on our website to give you the most relevant experience. By clicking “Accept All”, you consent to the use of ALL the cookies.
Cookie SettingsAccept All
Manage consent

This website uses cookies to improve your experience while you navigate through the website. Out of these, the cookies that are categorized as necessary are stored on your browser as they are essential for the working of basic functionalities of the website. We also use third-party cookies that help us analyze and understand how you use this website. These cookies will be stored in your browser only with your consent. You also have the option to opt-out of these cookies. But opting out of some of these cookies may affect your browsing experience.
Necessary Always Enabled
Necessary cookies are absolutely essential for the website to function properly. These cookies ensure basic functionalities and security features of the website, anonymously.
Functional
Functional cookies help to perform certain functionalities like sharing the content of the website on social media platforms, collect feedbacks, and other third-party features.
Performance
Performance cookies are used to understand and analyze the key performance indexes of the website which helps in delivering a better user experience for the visitors.
Analytics
Analytical cookies are used to understand how visitors interact with the website. These cookies help provide information on metrics the number of visitors, bounce rate, traffic source, etc.
Advertisement
Advertisement cookies are used to provide visitors with relevant ads and marketing campaigns. These cookies track visitors across websites and collect information to provide customized ads.
Others
Other uncategorized cookies are those that are being analyzed and have not been classified into a category as yet.
SAVE & ACCEPT